If you are attending Fashion Week in New York City this year, count on seeing a few Guns & Roses T-shirts floating around town! Front man, Axl Rose, and his band, Guns & Roses, will be playing 6 dates in the US, but their first 3 dates will be taking place in New York during Fashion Week. You can be certain that the fashion celebrity crowd will show up for these historic rockers, even though Axl Rose is the only original member left in the band.

I guess you could say Guns & Roses have inspired punk rock fashion. Axl Rose was practically an underwear model, he dated supermodel Stephanie Seymour, and he’s inspired Japanese designer Takahiro Miyashita, of Number (N)ine, to design a full collection based on his on-stage wardrobe.

Take Axl on the Road with you!
Carcia also showed off one of many rock and roll t-shirts in tribute to Guns & Roses! 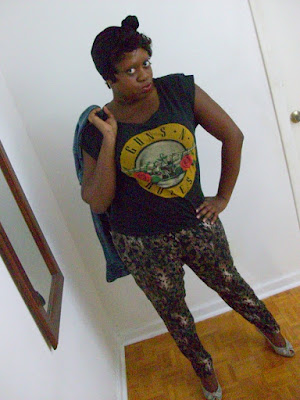 Our hope is, one day, that all original band members of Guns & Roses will get back together. Nothing beats the real original thing.
By Carcia & Telly
Stilettos & Rock n Roll,