Last night we were treated to musical British royalty! Pop legends Duran Duran made their highly anticipated stop in Toronto, promoting their album All You Need Is Now. With a career spanning over 30 years, Duran Duran gave us Rio, The Reflex, Hungry Like the Wolf, Ordinary World and countless other hits through the 1980s to present day. They were the band to capitalize on the the music video medium back in the day and with high fashion, high good looks, and clever danceable songs made a mark in music history. We’ve been fans of this band since childhood, this is our second time seeing the band live.
The show opened with California’s Neon Trees, a band inspired by new wave pop rock icons like Duran Duran and Depeche Mode. Their lead vocalist Tyler Glenn interacted with the crowd like a true showman! The songs, most not known to the crowd, caught on well to the dancing crowd and I think the band picked up some new fans.
We were all warmed up and ready to rock to Duran Duran.
John Taylor, Simon Le Bon, Roger Taylor, and Nick Rhodes with their fellow band members on guitar, backup vocals, sax and additional drums put on a very entertaining high energy show. Of course, the crowd really went crazy for the tried and true hits. For the new songs on All You Need Is Now, you can tell who has their new disc (we do). People who knew the songs kept dancing. The show also proved that Duran Duran are strong musicians going into Frankie Goes To Hollywood’s Relax while performing their hit Wild Boys. Another highlight? It was Simon’s birthday! Must be nice have 6 thousand people sing Happy Birthday to you. A nice cake was rolled out on stage and Simon, without missing a beat, pushed his face in the cake. He continued to say, “I thought you were going to do that,” he said to John Taylor. “I can’t f—– believe I did that to myself!”
Simon didn’t miss a note and his voice was just as strong as it seemed to be in 1984. The band, from bass to synth, was tight in beat and melody.
You can’t deny the quality of this bands delivery after all this time.
Pictures from the show: 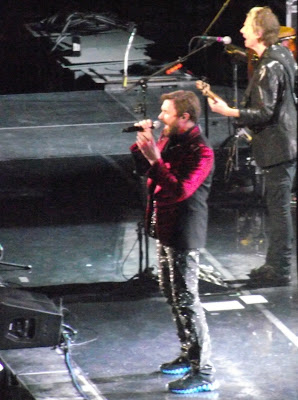 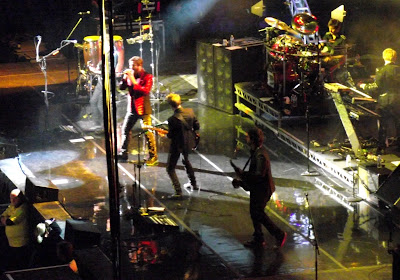 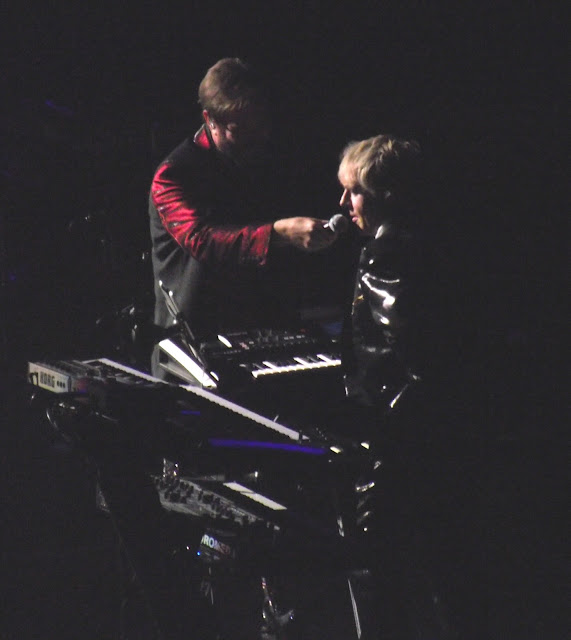