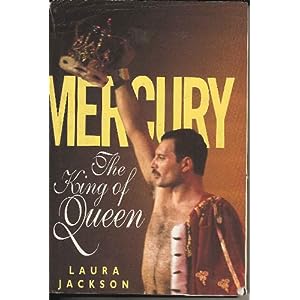 Jackson tries to take her readers on a Mercury ride.
Like many musicians, Telly and I crush madly and deeply for Freddie Mercury, the front man of the amazing Rock, Pop group QUEEN.
Freddie was a deep man to say the least. He wrote so many classic hits that, to this day, still remain on the music culture pedestal. Freddie was very masculine, yet very feminine and appeared to be a rock ballet dancer on stage. He was such a strong vocalist, but he made his delivery seem so simple.  Like his vocal styling he was a man of many levels. We feel his choice of lifestyle was his business and while most find his life to be interesting (yeah, I’ll say interesting) its hard to find a author who can put his amazing story in a book. Telly and I both read the book and came to the same conclusion. While Jackson tried to make a good read, this book lacks many things, such as sources, flow, and in a way, almost seems sensational, like the story were ripped off a bathroom stall door. Its an extended version of a tabloid, basically.
There are some great little stories and moments, but you wonder how Jackson came across some of these stories. You wonder if she talked to the surviving band members, Mary Austin, Peter Freestone, Jim Hutton or close friends at all. A huge piece of the 1980’s era is missing! (Freddie’s mustache era)
You also have to take into account the privacy factor. Most of Freddie’s REAL friends have sworn to keep quiet and not talk about their friend, which makes perfect sense and it should be respected.
Sure, you can call us biased because we LOVE Mercury, but this isn’t what music insiders or fans want out of a Mercury bio. By now you know there is a Mercury movie in the works and we are already anticipating Sasha Baron Cohen doing great justice to Freddie and the amazing band that is QUEEN :). The writing better be ON POINT, unlike this book :o/